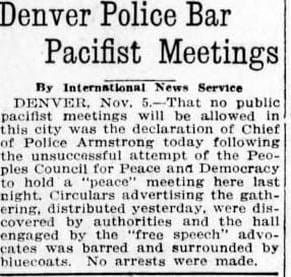 Ben Salmon published and distributed "Killing the Wrong Men" in October, 1917 and said of it in his Magnum Opus that the "...sentiment expressed in the article was entirely Christian, pointed out that it was wrong to kill anybody but, if killing was to be insisted upon, those responsible for wars--kings, presidents, kaisers, etc.--should be made to fight each other and not drag millions of innocent youths into a game where they would be compelled to slaughter each other."

As the Secretary of the Denver Branch of the The People's Council of America for Democracy and Peace, Ben wrote "Killing the Wrong Men" and sent out a mass mailing on October 29, 1917. The file, accessible through the above button, leads off with a cover letter from Ben J. Salmon appealing to the recipient to help the People's council "cob-web the nation with these circulars," referring to the copy of "Killing the Wrong Men" that was included in the mailing. To weave the cob-web, Ben appealed to the reader to "kindly persuade a few friends to flick you a simoleon" (simoleon was slang for a dollar bill) and send the money to Ben with an order for more circulars. The aim of the mailing was to get Americans to write Congress demanding "that wealth be taxed to pay for the war and that the United States strive for an early peace."

​    The pamphlet, which follows the appeal letter in the file, lays out a case against war, including a quote from President Wilson arguing against the use of force, and against the U.S. government "forcing Democracy on Germany." An explanation of the People's Council and its aim of an immediate negotiated peace are included, finishing with an appeal to "men and women of the type of George Washington, Abraham Lincoln and William Penn" to join the ranks of the People's Council.


The Consequences of People’s Council Pamphleteering


The article on the right from the Los Angeles Herald of November 7th, 1917 illustrates how abhorrent pacifists and "peace" were while the U.S. participated in the Great War. It also shows that the "bluecoats" were enthusiastically defending America's right to kill. This article gives a sample of the prevailing popular opinion a week following Ben Salmon's publication of "Killing the Wrong Men."


Four letters from the BOI file on the People's Council of America for Democracy and Peace illuminate the path Ben Salmon's pamphlet traveled en route to the BOI. Apparently Ben sent a pamphlet and fund-raising letter to the treasurer, F. J. Barnes, of the New York & New Jersey Lubricant Co. based in New York City. On November 5, 1917, Mr. Barnes forwarded the "letter and circular" to the New York Evening Sun describing Ben's efforts as "another appeal from the Kaiser." The next day, editor George M. Smith of The Evening Sun sent Ben's work on to The New York Sun Bureau in Washington, D.C. saying, "...this circular ought to go to the proper bureau of the United States Government. Will you kindly let me know what ought to be done with this sort of treasonable stuff?" The next letter in the file is from Leland Harrison of the State Department to the Chief of the Bureau of Investigation, A. Bruce Bielaski written on November 12, 1917. Harrison encloses "some papers regarding the People's Council of America, which should receive prompt and careful attention." Harrison then asks: "Would it not be possible to have the use of the mails denied to Benjamin J. Salmon?" (Mail censorship was made lawful by the Espionage Act of 1917.) The Chief wrote back to Harrison on November 21, 1917 acknowledging receipt of Harrison's letter and stating: "A thorough investigation is now underway and as soon as completed, it will then be determined whether or not criminal prosecution can be instituted against this man."

The results of the investigation are not explicitly stated in the BOI files, but in a letter Ben Salmon wrote on January 20th, 1918, he states: "The federal authorities found nothing illegal in this circular." Further on in that letter Ben writes: "Altho my circular contained nothing contrary to law, its wording inoffensive to the most delicate tastes, nevertheless, upon learning that people misunderstood my motives, I destroyed all the copies of circular "Killing the Wrong Men," and promised not to circulate any more of them. United States District Attorney Harry B. Tedrow publicly complimented me in the press of this city on November 10th, 1917 ..."

Tedrow was probably responsible for the suppression of "Killing the Wrong Men" as evidenced by a report to BOI headquarters from Denver agent James W. Melrose. Melrose wrote on November 13, 1917:

... Mr. Ben J. Salmon was recently called to the office of U. S. Attorney Tedrow respecting the circulating as well as the issuing of the above referred to pamphlet "Killing the Wrong Men", and as the result of that conference with Mr. Salmon, U. S.  Attorney Tedrow today handed me the following communication dated Denver, Colo., Nov. 5, 1917:

Dear Mr. Tedrow:
I have just destroyed five-thousand copies of
enclosed circular "Killing the Wrong Men".  The
janitor in this building is witness to this fact.
I shall see to it that nothing more of this nature is
written or circulated by me.
I feel that the distribution of these circulars
would not be beneficial to America's cause at this time
and I will not be used to aid any propaganda of anti-
Americanism.
I am as much a pacifist as I ever was, but
incline to believe that I can do more good for the
cause by not giving any aid to professed "patriots"
who are seeking to get myself and others into trouble.
Hoping this will be satisfactory,
Very truly yours,
(Signed) Ben J. Salmon.

Exercising his authority under the Espionage Act of 1917 to curtail unpatriotic speech, US Attorney Tedrow persuaded Ben Salmon to cease publication of "Killing the Wrong Men" which meant that the pamphlet was "in print" for a little more than a week. Fortunately, Ben had widely circulated the first printing and several recipients found the pamphlet to contain seditious and treacherous writing so that they forwarded it to the BOI. Thus, the BOI served as an archive for several copies and transcriptions of Ben's pamphlet and the dangerous ideas they contain.

Ben Salmon immediately began work on another pamphlet regarding the American war effort and again circulated it widely and again the Bureau of Investigation archived several copies and investigated the content of the pamphlet. Ben's next effort was entitled "Tax the Rich to Pay for the War."